The proposal is to have the user notified that there are updates and ask to trigger the automatic download and installation of those updates.

The Extension aims to:

1) Look for updates to WL7Client and Extensions
2) Look for new, not yet installed extensions
3) Download updates in background
4) Manage the installation of updates
5) Relaunch WL7

I hope to expand it to give user option to select which extensions are checked, currently it's "everything available".

See description and screen grabs in this post:
https://www.wealth-lab.com/Discussion/Update-all-extensions-at-once-6893 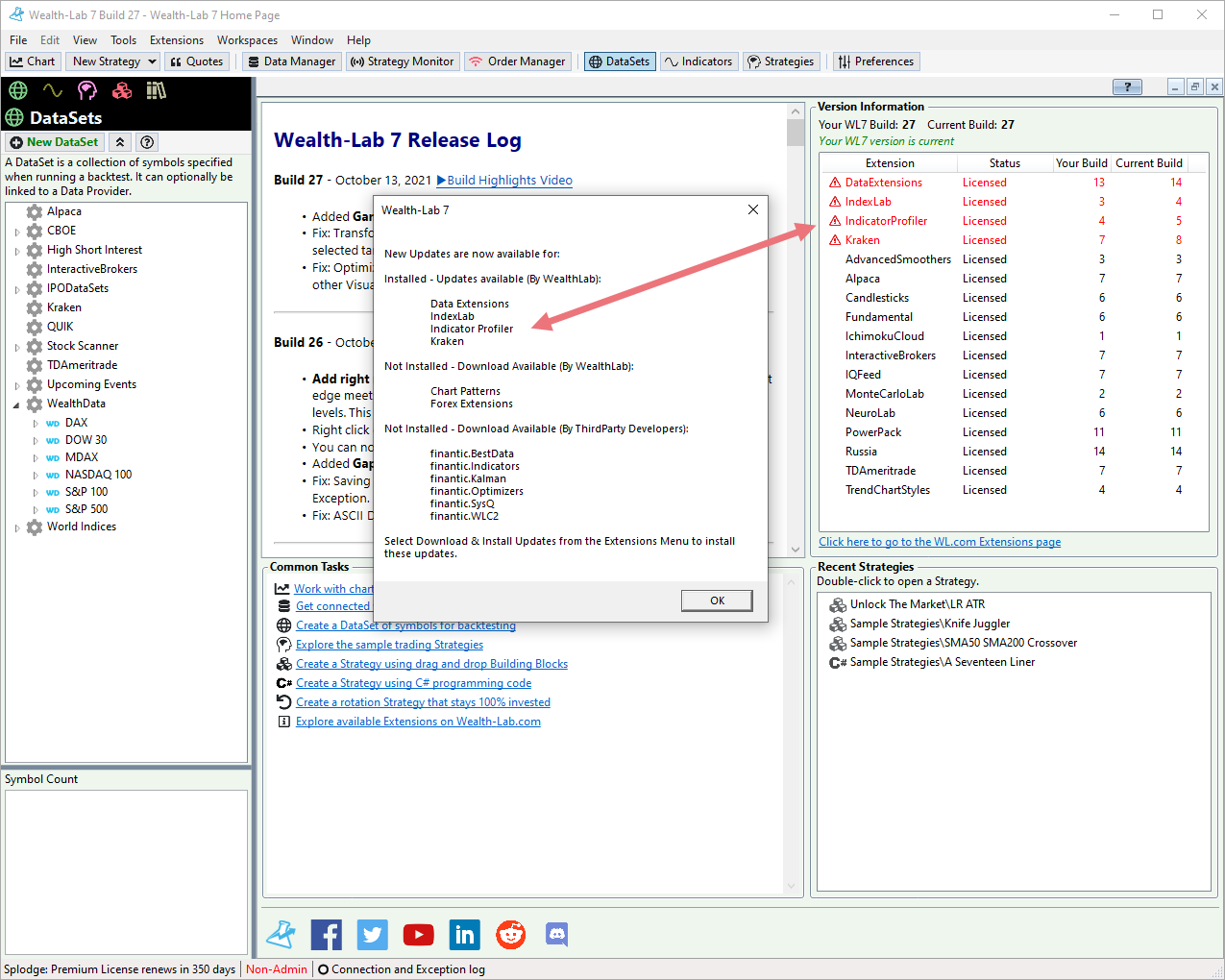 Right now, I'm now waiting for WL7 Build34 to be released to test the new features. If all goes well, we'll wrap it up and get it very soon.

Here is a teaser: 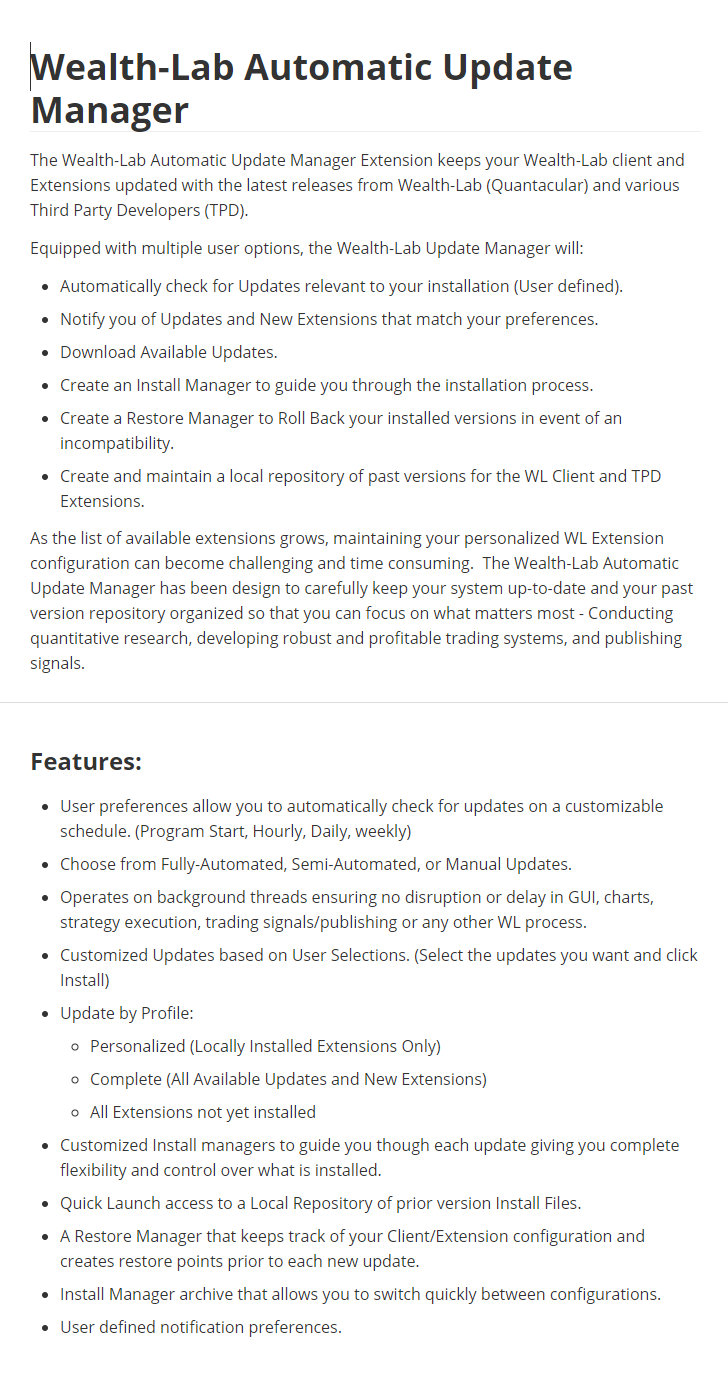 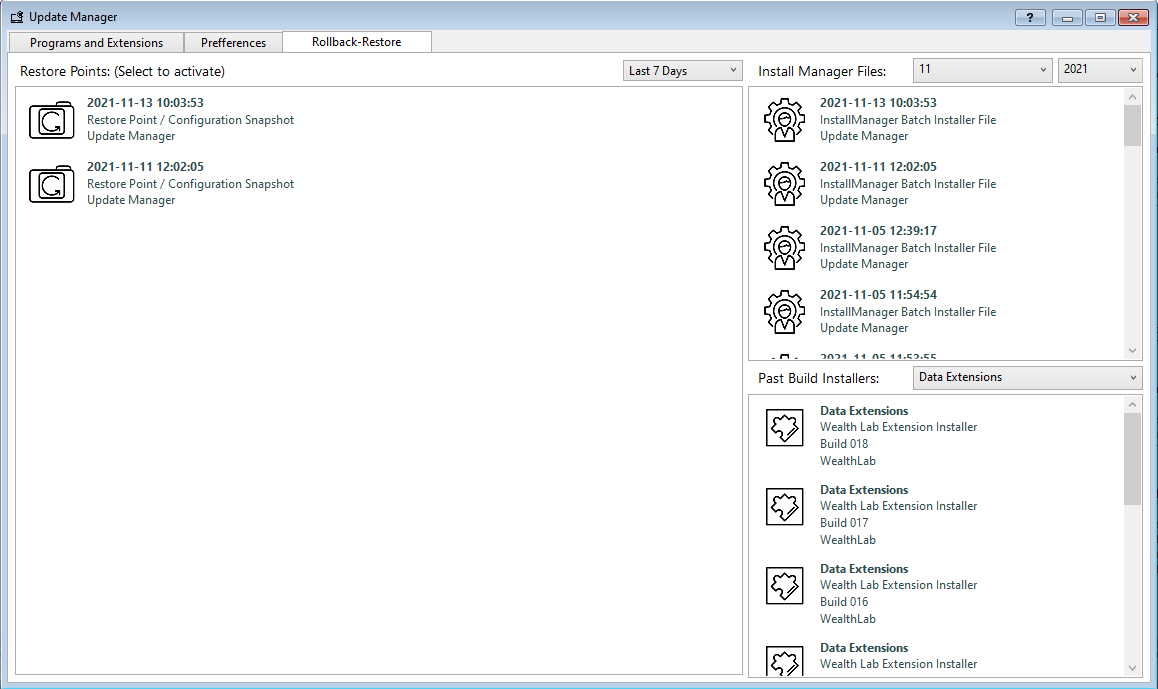 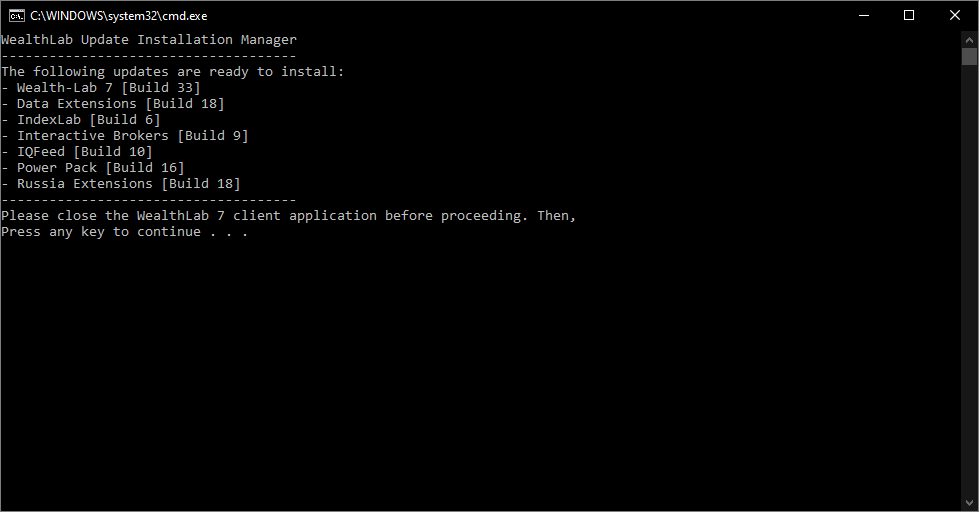 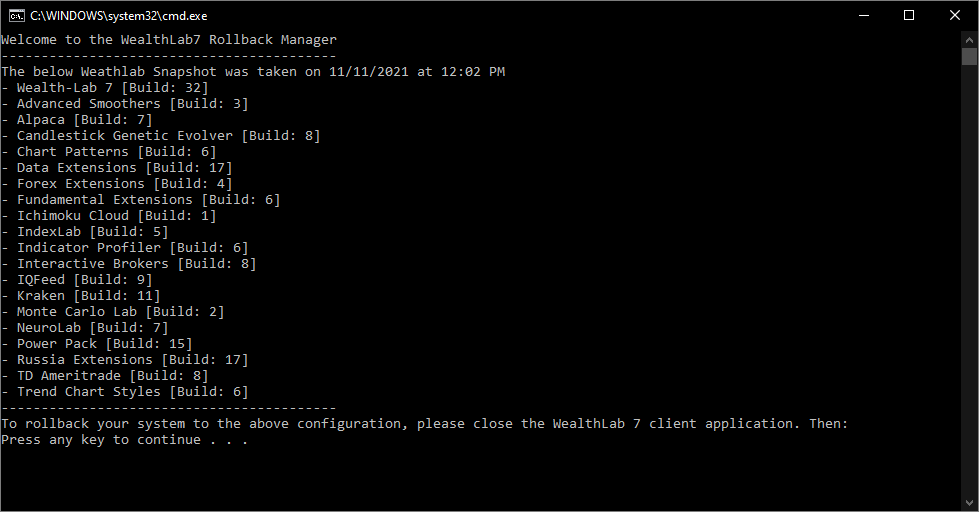 Quick question. Is there a way to uninstall Extensions where all installed files are removed? (.dll, .md , required resource files, images, etc)

The installers seem to install only. No uninstall / modify options.

My only concern for the snapshot management & restore is that reverting to a previous "stable" build might leave the user without support and create an impression on Discussions that he's running the latest build. But our team has to check and make sure he is doing so anyway.
0
splodge7
2021-11-18T07:07:15Z - 2021-11-18T07:07:15Z ago
#10
I could put a warning message in there if you think its appropriate.

QUOTE:
Warning, due to the rapid development environment of the WealthLab development community, rolling back to previous versions may result in limited support from the software or extension developer. Previous versions may not contain features required for your stregies to function correctly. Only proceed if you understand the risks and accept the limitations imposed by the technology.

The idea behind the rollback feature was to provide fast recourse in the event of an unidentified conflict between thirdparty extensions. As more developers create valuable add-ons there is an increased chance of conflict... Wordpress is a wonderful example!

I thought it would be helpful to quickly roll back a bulk update, then update only the non-conflicting extensions until such time as the conflict is resolved by the developers.

Another example might be a "breaking change" in the WL Client that impacts an extension that is required for an individual users strategy management. In such a case, they would benefit from rolling back the client build until the extension developer has had time to resolve the issue.

Bottom line, If my system is actively trading (or publishing) I need a way to restore the last known stable instance in the event of a conflict that prevents my system from functioning. I can't wait for the developers to fix it. Immediate action is required. But that action, IMO should be a temporary stop gap measure, not a permanant solution.

I understand your concern especially when fielding support through the forum. That could create an unnecessary burden.

Crazy thought, when WL authenticates, could it tell WL servers what build is currently running and update a field in the user profile. That way when dealing with support through the forum you would immediately know if the user is running an up-to-date system.

For example: It could change the display name to something like "Splodge [B:33]" or use a colourcode similar to the premium/customer/trial/author icons. You could use a colour scale of green , yellow, orange, red to indicate up to 3 builds behind current.

By using the authenticate process you'll always have a "most recent instance" vantage point.

-----------
Side note... IMO it would be wise for all users with active systems (live or demo) to install new updates into a temporary staging directory to TEST first, then if everything appears stable, install the updates to the live directory after backing up the working directory. This, I beleive would be good policy and reduce the risk (and stress) of unexpected incompatibilities and breaking changes.
1
Eugene7
2021-11-18T07:47:20Z - 2021-11-18T07:47:20Z ago
#11
Overall, I think your rollback/snapshot idea adds real value and could help to quickly unroll an upgrade gone bad due to API change / 3rd party extension conflict. Thank you for implementing it. Your new (paid?) extension is a step forward even compared to the legacy Extension Manager (V6).

QUOTE:
Crazy thought, when WL authenticates, could it tell WL servers what build is currently running and update a field in the user profile.

I haven't decided yet. There are good arguments either way. I'd love to hear some feedback form WL7 users on this.

QUOTE:
already on our internal wishlist

Well then, at the rate you push out new features this will be done before I wake up tomorrow ;)

But it seems like a great addition that took a lot of work so it makes sense you should get paid somehow (user or WL buys it). If there is a cost, even though I would love automated updates, I'm not sure I'd pay a ton for it since it's a time saver (5 min every couple of weeks) and not added features (other than the roll-back but I'm not sure how many people need that and you can also do that manually if it's really important to you).
0
Replikant_m7
2021-11-20T20:04:35Z - 2021-11-20T20:04:35Z ago
#14
Mmm, nice. I was going to say something like: this is nice, but just a time saver so it would better be free rather than paid... but it has Restore Manager that looks like a value-adding feature.
0

In order to create or respond to a discussion you need to be logged in.