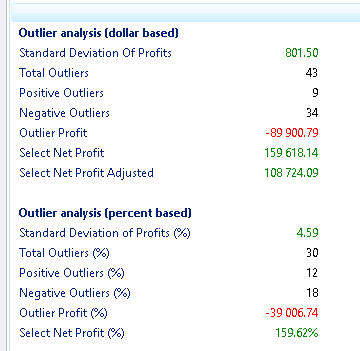 However, I'm still left questioning the values. I've tried exporting the trade list and calculating them myself (as I understand them to be) but I fail to reach the same results.

The term Outlier is defined in the referenced post and the Metric Tip as a trade which has a profit at or beyond 3 * Stdev +/- from the mean of profits (I assume profits includes negative profits).

As I understand it,

1) The original values (based on $) are calculated using $ profits made per trade, and:

3) Both methods utilize the same functions for calculating results, only the data fed in is chaged from $profit to %profit.

I can understand how the metrics might be helpful, however in the example below all 495 trades produced by the strategy are classified as outliers when using the % based aproach.

This seems odd to me. Generally speaking, in a normalized distribution one would expect less than 0.5% of the data to be considered an outlier acording to the definition above. I understand that the very nature of trading system development, if successful, is biased toward profitability more than loss, therefore a skewed distribution is more likely (Hopefully). One would expect that the further the skew is to the left, the more profitable the system.

In the case below, this strategy had a 100% win rate with profit target at 8.25% and % based position sizing over 25years. Somehow, it has resulted in ALL trades identified as outliers.

Are you able to show the code snippet that calculates these metrics so I can better understand there calculation? If not, that's ok. Eitherway, I appreciate the feedback and article reference. 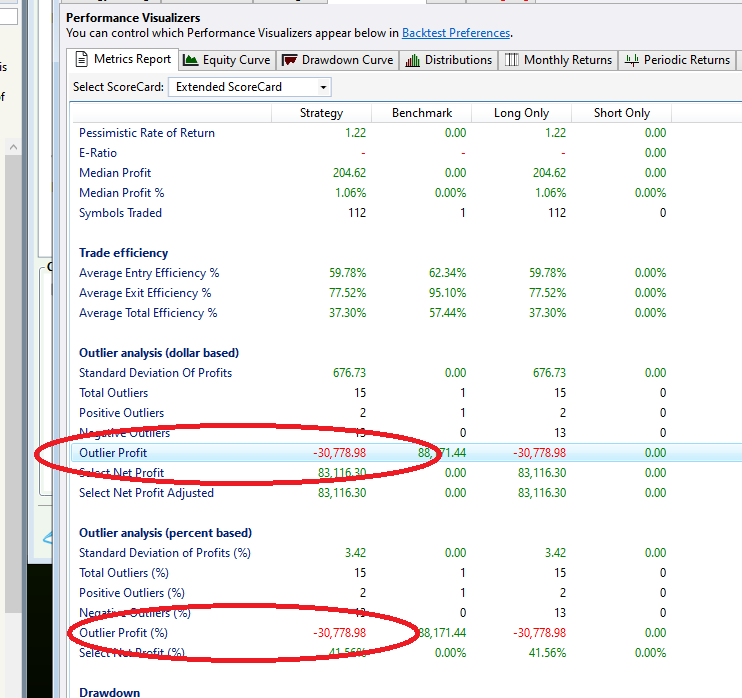 QUOTE:
Eugene, it looks like the Percentage metric (the second one circled) is still reporting raw numbers and not percent ...

QUOTE:
But leaving them both synonymous would also be very ambiguous either?

Probably not. Let's make it the way it's been in WL6 then! Will also document this in the help.

It just looks to me like a copy/paste error and you're not sending the correct value to the metrics report for Outlier Profit %.

Ouch, it shouldn't be a percent. Good catch and glad this hasn't leaked to production build! :)

If you dump the positions list into excel and use the STDEV function on the $ profit column i think you will find it comes to $1,191.39

Are you using the Math.Numerics StDev functions, or did you write your own? I wrote my own today, and it matches Excel. However excel and my code do come to the same value of 0.86 forthe Stdev(%profits-per-position), which might indicate the data for the $ pass is not the $profit-per-position but something else. 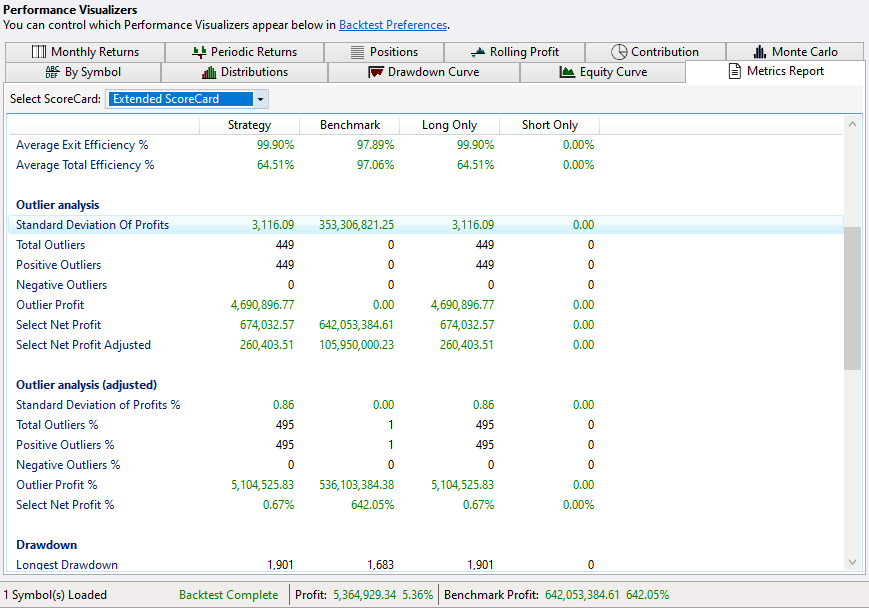 In order to create or respond to a discussion you need to be logged in.