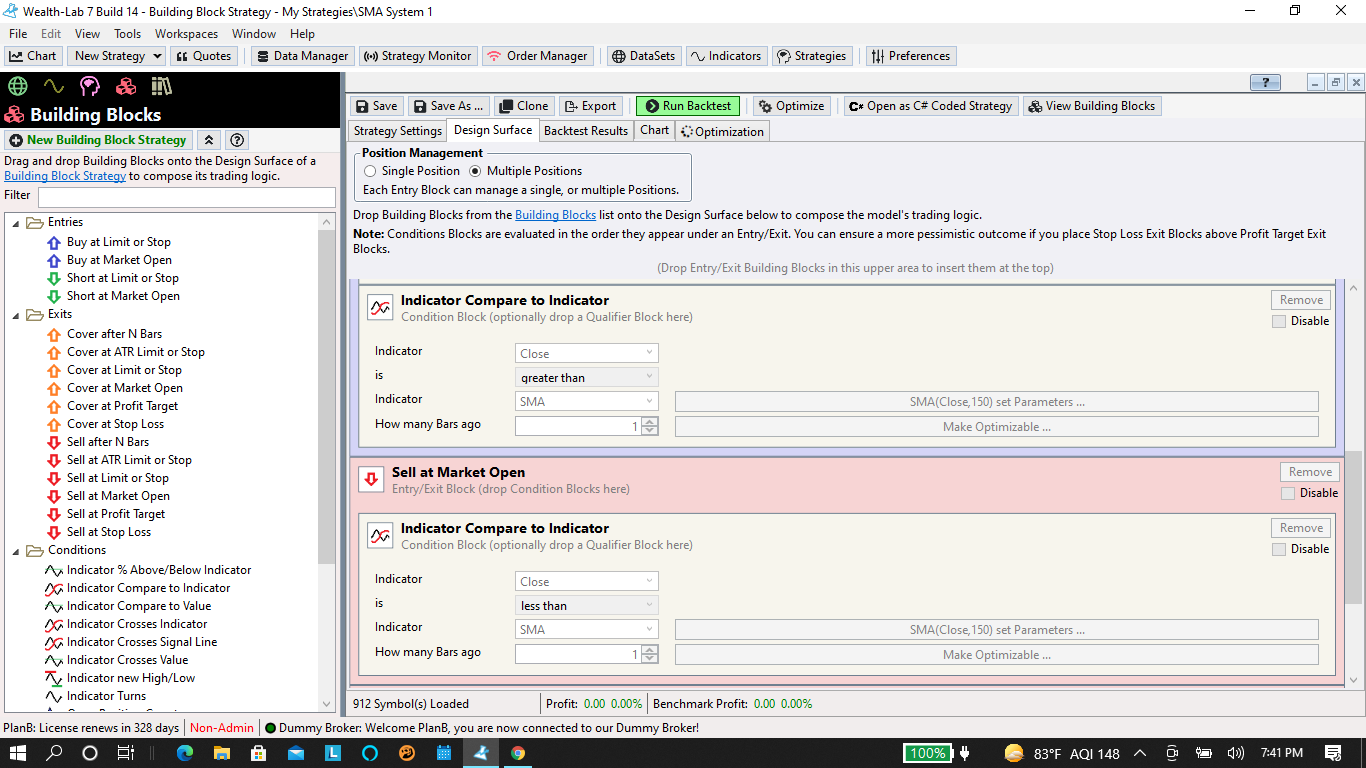 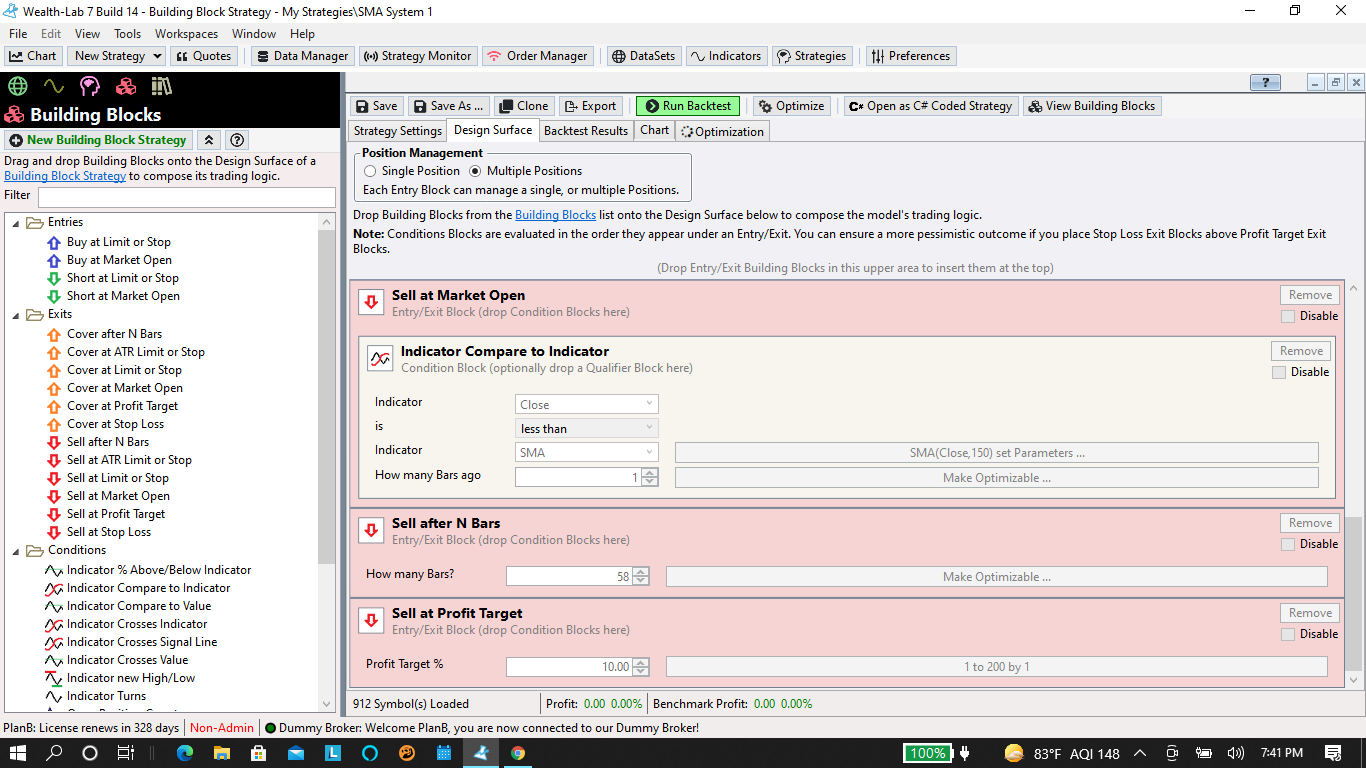 1. What does it mean it's not running? Can you switch to the Optimization tab which is busy running your optimization?

2. Is this happening on both your machines or just one, and if the latter which one?

In my case, this occured first for me about a month ago - also when using the shinking window optimization process. At the time I thought it was just bogged down in calulations. 30-40 stocks, 10years+ history, multple parameters etc. Interestingly the GUI also became unresponsive after a while, but the Task Manager shows that Wealthlab is still utilizing memory, CPU and disk with fluctuating values (alive in the background) providing evidence to my theory that it was just "busy" deep in optimiation loops. I left it for several days, but it never reached the end of the optimization process.

An "end task" via the Task Manager and PC restart resulted in being able to run an optimization without issue (took about 20 minutes). However the optimization was exhaustive - not Shining Window - on only a few years of data an only 2 paramseters

I started a new Shinking window optimizer yesterday (latest software version and all extensions updated) and found the same issue again. Could it be an issue with the shinking window's progress report event to GUI thread not firing often enough with a larger paramter set? Just a shot in the dark.

Screenshot below from todays event on my laptop (minimal CPU and RAM) showing task manager and GUI unresponsive. It's been this way for 5-6 hours. I havent tested it on my high end machine yet. Will kill this one and try an exhaustive then report back.

I should note that my original test was on the pre-packed SMA50 SMA200 Cross Over Strategy (not a custom built strategy). I thought this worth noting as coding errors / unoptimized logic etc could also lead to longer run times and hangs. However in this case it was a WL7 shipped strategy which hopefuly is logic optimised :-) 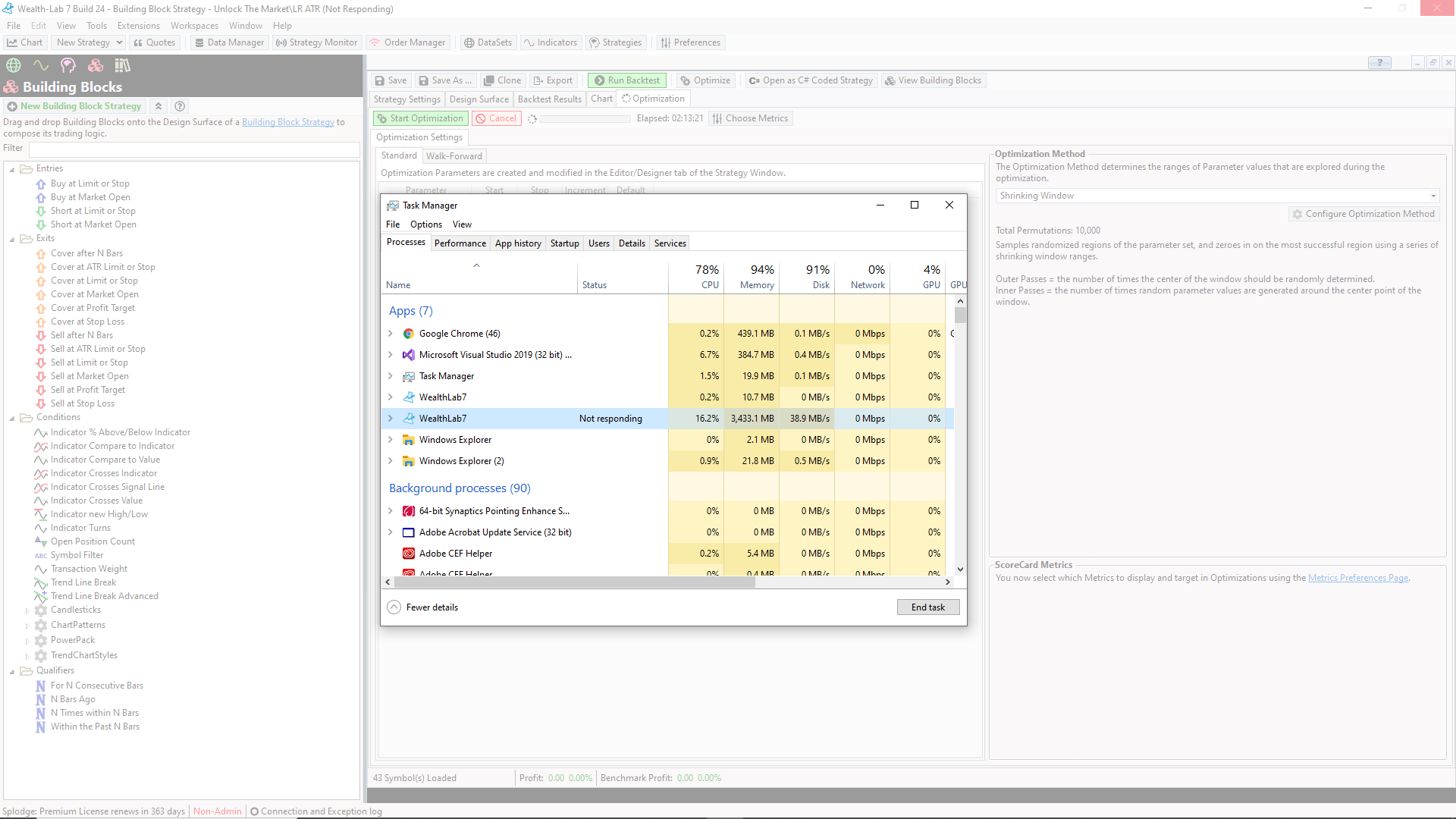 Create some type of "optional progress log" for the optimizer for troubleshooting such a problem. My guess is that there's some kind of infinite loop or numerical, data-dependent, non-convergence with the strategy. There needs to be some kind of optional logging (or progress bar) to narrow down exactly where the problem is; otherwise, you're just guessing.

If it's a data dependent problem with the convergence, then you need to find which stock is messed up that causes the non-convergence. Just start making the dataset smaller (removing stocks) until the problem disappears.
1
splodge7
2021-10-08T15:20:41Z - 2021-10-08T15:20:41Z ago
#13
All good suggestions thanks. I'll start working my way through the data set and add some logging to the strategy.

The GUI continued to updated until about the 13 hour mark albeit at longer intervals between updates as time progressed. Initially every few minutes, then every 10-15, increasing to every hour then one last update from 10 hours to 13 hours. Since then it has been in the same seemingly unresponsive sate as described earlier for over 10 hours.

Comparatively, the Shinking Window stopped updating the GUI after about 2 hours. Same strategy, dataset and timeframes. However, a larger number of params were selected for optimization.

1) A parameter in my strategy was set to default 0, when optimization range was set from 1-50. The 0 value was causing an infinite loop.

2) The data size and permutations selected on my laptop/notebook had a significantly significantly greater demand on resources than I expected. I have run a comparison on my Dual CPU Xeon with SSD's and 96GB ram and the difference is remarkable. An optimization that took nearly 8 hours to complet on the Xeon had barely reached 10% on the laptop/notebook. The first 12 hours exibhited all the same characteristics as described in earlier posts it was not until the second 12 hour window that the progress bar began to show change.

3) It would seem the WLD SP500 data set has an issue somewhere in the nearly 1000 stocks. Any atempt to complete a backtest (not optimization) on this dataset results in "spinning wheel". I'll try deleting all the data and starting fresh. But I think the major issues are all dealtwith.

QUOTE:
Looks like the data file in question is one of the other 800 in the SP500 list

I've restarted WL7 on my notebook, updated data and successfully run a backtest on the WLD SP500 dataset from 1996-2021.

In order to creating or responding to a discussion you need to be logged in.